Prominent poets and writers from across the country and a large number of scholars from the Twin Cities attended the Parveen Shakir Urdu Literature Festival on Tuesday hosted by the Parveen Shakir Trust (PST) at a local hotel and listened to their favorite poets in a number of debates on different literary subjects.

The event brought together stars from the literary galaxy Amjad Islam Amjad, Asghar Nadeem Sayyid, Mustansar Hussain Tarar, Professor Fateh Muhammad Malik, Dr Tahira Iqbal, Dr Najeeba Arif, Asim Butt, Mehboob Zafar and many more who were came from different regions and cities of the country to witness and experience the warmth of literature in the cold weather of Islamabad.

A number of awards as well as cash of Rs 850,000 (total) were also announced and handed out on the occasion. In this way, PST became the first and only private sector organization to not only promote the books and writings of poets and writers, but also financially support them to encourage them in their efforts.

One of the highlights of the event was the arrival of Turkish academic and writer Dr Davut Sahbaz from Turkey to Islamabad to receive his Nayyir Adabi Award (with 100,000 rupees) for his book on Mazharul Islam (Life , Style and a selected stories).

At the opening ceremony, PST President Parveen Qadir Agha expressed her pleasure and satisfaction that the trust placed in the memory of the late poet Parveen Shakir to promote and preserve her literary works and care of her son, has now grown into a well-established forum for sponsoring and supporting emerging writers and poets.

She also paid rich compliments to life member of PST Mazharul Islam, a nationally acclaimed short story writer for creatively organizing the event, designing the awards and inspiring the team to continue working for this cause.

On the occasion, the Husn-e-Funn Prize (as well as the cash prize of Rs 100,000) was awarded to Amjad Islam Amjad for his lifelong work in different literary genres, namely poetry, the writing of plays and travelogues.

The Mian Atta Rabbani Sada Bahaar Prize (with 100,000 Rs) was awarded to Mustansar Hussain Tarar for his novel Khas-o-Khashak-e-Zamanay. 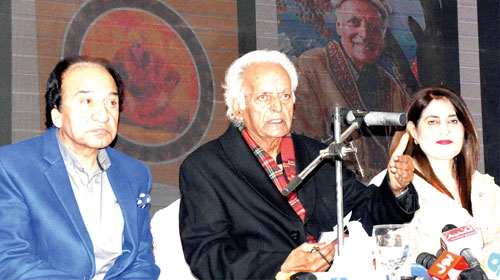 The Niaz Ahmed Adbi Prize (50,000 rupees) was awarded to Saeed Ahmed for the translation of Paulo Coelho’s book “By the river Piedra, I sat and I cried”, under the title “Girya bar Kinar Darya “.

The annual Aks-e-Khushbu Poetry and Fiction Awards were also announced with Rs 50,000 in cash each.

An important segment of the event was the discussion on “The Future of Print”.

A Mushaira (poetry recital) also followed the ceremony and the poets of “ghazal” and “nazam” presented their kalam.